Bedlam burial ground dig in London begins; could excavate up to 3,000 skeletons 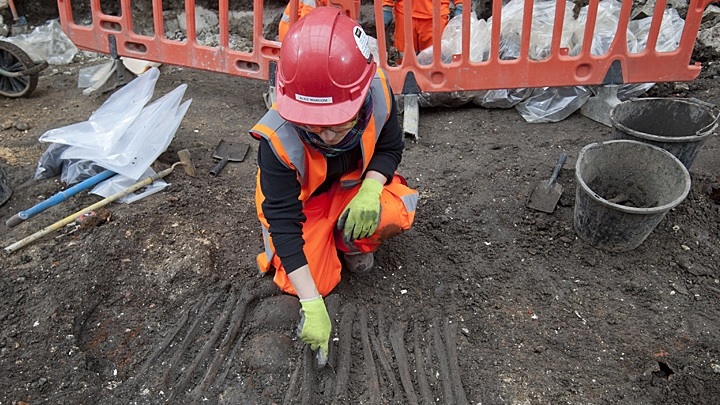 Archaeologists from Museum of London’s archaeology (MOLA) unit have started digging the Bedlam burial ground for Crossrail to prepare for the new Liverpool Street station east entrance and they are expecting to excavate some 3,000 skeletons including those of victims of the Great Plague from a burial ground.

A total of 60 researchers will be working on site in shifts six days a week over the next month at the Bedlam burial ground to remove the ancient skeletons, which will eventually be re-buried at a cemetery near London.

Crossrail, which is building a new east-west train line in London, said the dig near Liverpool Street station was being carried out on its behalf by the Museum of London’s archaeology unit.

The company said in a statement that the bones would be tested to “shed light on migration patterns, diet, lifestyle and demography” of Londoners at the time.

“Archaeologists hope that tests on excavated plague victims will help understand the evolution of the plague bacteria strain,” Crossrail said in a statement.

According to MOLA, the Bedlam burial ground was in use from 1569 to at least 1738, during which the city witnessed the start of the British Empire, civil wars, the Restoration, Shakespeareâs plays, the Great Fire of London and numerous plague outbreaks.

“2015 marks the 350th anniversary of Londonâs last Great Plague in 1665 and we hope that scientific tests on excavated plague victims will help us to better understand the evolution of the plague pathogen”, MOLA said in a statement.

The excavation is also expected to further uncover the remains of an ancient Roman road, where Crossrail said that several artefacts such as horseshoes and cremation urns have already been found.

The area was London’s first municipal burial ground and was named after the nearby Bethlem Royal Hospital or “Bedlam” — the world`s oldest psychiatric institution, which has since relocated outside London. The burial ground was used by Londoners who could not afford a church burial or who chose to be buried there for religious or political reasons.

Members of the Levellers, a 17th-century political grouping that advocated popular sovereignty and religious tolerance, are believed to be buried there.

“Construction for Crossrail is providing rare and exciting opportunities for archaeologists to excavate and study areas of London that would ordinarily be inaccessible, such as under established road-systems”, said Nick Elsden, Project Manager from MOLA. “There are up to six metres of archaeology on site, in what is one of the oldest areas of the city, so we stand to learn a great deal.”

According to Crossrail during excavations at 40 different sites, it has managed to unearth more than 10,000 artefacts till date. Preliminary excavations at Liverpool Street in 2013 and 2014 uncovered more than 400 skeletons.