In a first, Dawn slips into Ceres’ orbit 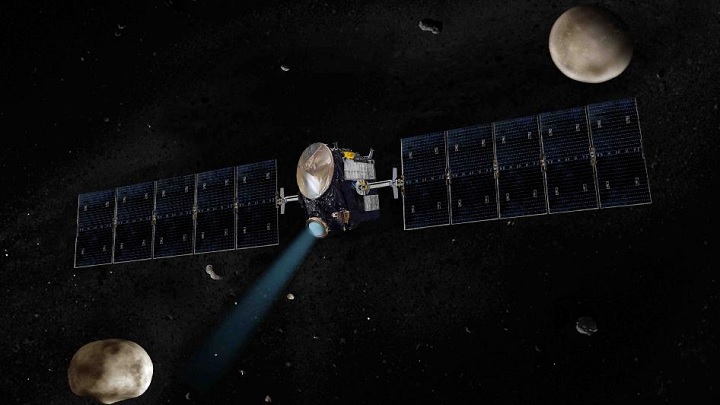 NASA’s Dawn has slipped into Ceres’ orbit at about 4:39 a.m. PST (7:39 a.m. EST) Friday according to plan thereby becoming the first ever spacecraft to not only orbit a dwarf-planet, but also the first to orbit two extraterrestrial targets.

According to NASA, Dawn was approximately 38,000 miles (61,000) kilometers from Ceres when it was captured by the dwarf planet’s gravity. Mission controllers at NASA’s Jet Propulsion Laboratory (JPL) in Pasadena, California received a signal from the spacecraft at 5:36 a.m. PST (8:36 a.m. EST) that Dawn was healthy and thrusting with its ion engine – the indicator that Dawn had entered orbit as planned.

Dawn reached Ceres after a journey spanning 7.5 years and covering a distance of a whopping 3.1 billion miles (4.9 billion kilometers). Ceres is Dawn’s second target as from 2011 to 2012 it explored the giant asteroid Vesta and provided new insights and thousands of images from that distant world.

Ceres and Vesta are the two most massive residents of our solar system’s main asteroid belt between Mars and Jupiter. Ceres was discovered back in 1801 and since then it has been classified as a planet, then an asteroid and finally a dwarf-planet.

Dawn has been sending some stunning images of Ceres since the beginning of the year and the latest image of Ceres show not one but two mysterious bright spots adjacent to each other.

Dawn will be on the side of Ceres that faces away from the Sun until mid-April and NASA says that when the spacecraft emerges from the dwarf-planet’s dark side, it will be sending out ever-sharper images as it spirals to lower orbits around the planet.

Dawn will be using its Framing Camera to capture detailed optical images of Ceres, which will be used for scientific purpose as well as navigation of the craft. As the spacecraft lowers in orbit, Dawn’s Gamma Ray and Neutron Detector and Visible and Infrared Mapping Spectrometer will be jumping into action with the former measuring elemental composition of Ceres and the latter carrying out surface mineralogy of Ceres. [Read More: Ceres bound Dawn packs three major scientific instruments]

“We feel exhilarated,” said Chris Russell, principal investigator of the Dawn mission at the University of California, Los Angeles (UCLA). “We have much to do over the next year and a half, but we are now on station with ample reserves, and a robust plan to obtain our science objectives.”