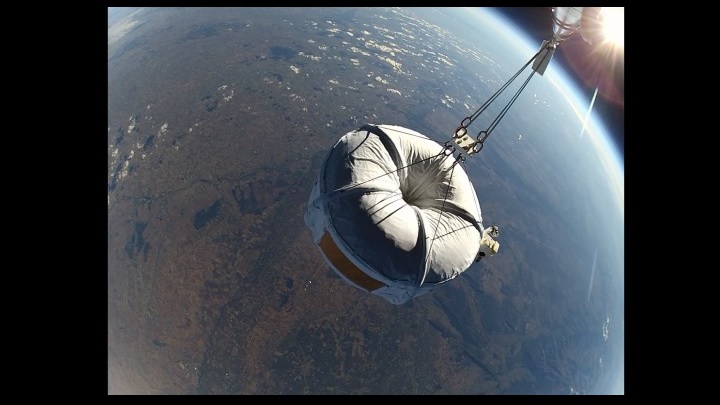 March 20 solar eclipse has been a talking point for over a week now and as you might be aware that total eclipse won’t be visible except for northern Scandinavia and the Faroe Islands. However, scientists want to provide a 360 degree view of the solar eclipse to everyone by using GoPro cameras high above Earth’s stratosphere.

To this effect ‘zero2infinity’ group – the team behind this initiative – has recently launched an Indiegogo campaign to raise funds for the project. The goal is to raise â¬25,000 and as it stands the team has managed to raise â¬2,746 as of this writing. The team’s plan is to launch a balloon carrying GoPro cameras to record a 360 degree video of the eclipse from at least 31 miles (50km) above Earth.

“We will use our zero-emissions stratospheric balloon to carry GoPro cameras mounted on a rig to record a 360 degree spherical video at an altitude where the view of the Earth and the Sun is very similar to what astronauts experience from the International Space Station”, reads the project description on the campaign page.

“Then, on the ground you will receive the video feed into your tablet or smart phone, being able to feel as if you were in Space â looking out your âwindowâ to see the whole world below.”

In an online video project coordinater Annelie Schoenmaker says ‘Eclipses happen quite often. But this oneâs different. The moonâs shadow will sweep over the North Pole” and this is an event that occurs once every 500,000 years or so!

How much obstruction in the UK

Space scientists in the Midlands have issued warnings to all those wanting to view the March 20 solar eclipse in the UK asking them to refrain from viewing the eclipse directly.

Scientists warn that people should only attempt to view the eclipse provided they meet some very specific requirements including specialist equipment.

First and foremost is the use of specialised filters that prevent damage to the eye. Ensure that the filters you decide to use are bearing the CE mark and are conforming to European Community Directive 89/686/EEC. You can also use a welderâs glass with rating No. 14 or higher. Scientist recommend that even while using specialist equipment, avoid looking at the Sun for more than two minutes.

Pinhole projectors are pegged as the best means of viewing the eclipse. To make one for yourself you need to two sheets of white paper, and a sharp pin. Punch a tiny hole through one of the sheets and make sure that the hole is round and smooth. Hold the sheet with the hole in front of the paper and use the second sheet of paper as a screen. Hold it at a distance so as to project an inverted image of the Sun through the pinhole onto it.