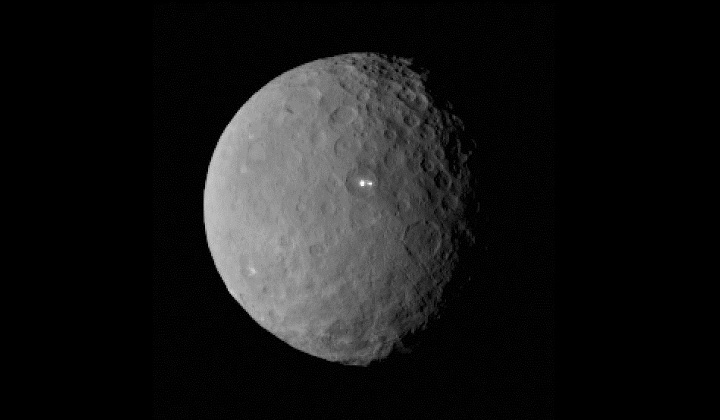 NASA’s Dawn is fast approaching Ceres and the dwarf-planet continues to puzzle scientists as the latest image has revealed two and not one bright spot on the celestial body.

This is for the first time that the second bright area has been spotted and with scientists speculating a volcano-like origin, they are yet to come to a conclusion about the bight spots and their geographical interpretation.

“Ceres’ bright spot can now be seen to have a companion of lesser brightness, but apparently in the same basin”, said Chris Russell, principal investigator for the Dawn mission, based at the University of California, Los Angeles. “This may be pointing to a volcano-like origin of the spots, but we will have to wait for better resolution before we can make such geologic interpretations.”

Scientists are hoping to find an answer to the bright spot puzzle with better images from Dawn as the spacecraft approaches the dwarf-planet and prepares for a 16-month study.

“The brightest spot continues to be too small to resolve with our camera, but despite its size it is brighter than anything else on Ceres. This is truly unexpected and still a mystery to us,” said Andreas Nathues, lead investigator for the framing camera team at the Max Planck Institute for Solar System Research, Gottingen, Germany.

Dawn packs three major instruments using which it will be providing detailed information on Ceres. The Framing Camera will be capturing detailed optical images of Ceres. These images will be used not only for scientific purpose but will aid in navigation of the craft as well. Using its Gamma Ray and Neutron Detector, Dawn will measure elemental composition of Ceres and using its Visible and Infrared Mapping Spectrometer will be used to carry out surface mineralogy of Ceres.