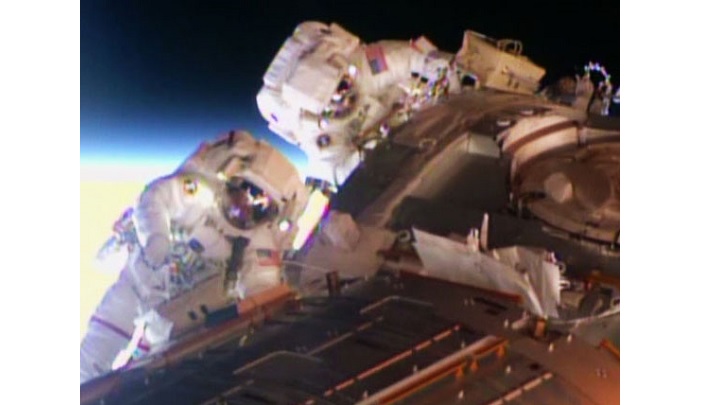 NASA astronauts Barry Wilmore and Terry Virts have successfully completed first of the three spacewalks to prep the International Space Station (ISS) for space taxis from Boeing and Space Exploration Technologies (SpaceX) slated to arrive in 2017.

The space walk lasted for 6 hours and 41 minutes and at 2.26 p.m. (EST) February 21. This was the first spacewalk in a series of three spacewalks to be carried out by Expedition 42 astronauts mean to prepare the ISS for a pair of international docking adapters (IDAs) that will allow future commercial crew vehicles to dock.

The duo rigged a series of power and data cables at the forward end of the Harmony module and “Pressurized Mating Adapter-2” and routed 340 of 360 feet of cable.

“The cable routing work is part of a reconfiguration of station systems and modules to accommodate the delivery of new docking adapters that commercial crew vehicles will use later this decade to deliver astronauts to the orbital laboratory,” NASA said in a statement.

Astronauts have now spent a total of 1,159 hours and eight minutes conducting space station assembly and maintenance during 185 spacewalks.

NASA has awarded contracts to Boeing and SpaceX to develop, test and fly capsules that can taxi astronauts to and from the station.

According to SpaceX, the upgraded Dragon V2 passenger spacecraft should be ready for an unmanned debut test flight to the station in late 2016 and a crewed test flight in early 2017.

Boeing plans is to dock an unmanned CST-100 test flight to the station in April 2017.