Ceres’ images getting sharper, thanks to Dawn 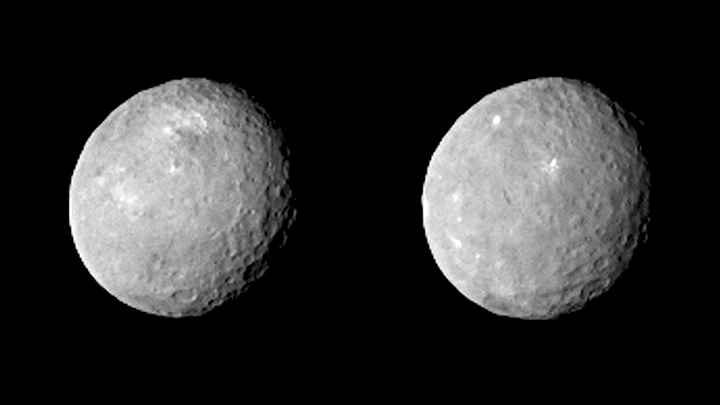 NASA’s Dawn is on its way towards Ceres and every time it sends back images of the dwarf planet, they keep getting better and better. The latest set of images reveal a lot of craters and mysterious bright spots.

“As we slowly approach the stage, our eyes transfixed on Ceres and her planetary dance, we find she has beguiled us but left us none the wiser,” said Chris Russell, principal investigator of the Dawn mission, based at UCLA. “We expected to be surprised; we did not expect to be this puzzled.”

Dawn captured the new images at a distance of just 83,000 km from the dwarf planet and though the spacecraft is quite far from it, scientists have already been puzzled by the questions that its images bring up. The latest images which have a resolution of 7.8 km per pixel represent the sharpest views of Ceres to date and were captured on February 12. [Read More on Dawn: Ceres bound Dawn packs three major scientific instruments]

On March 6, Dawn will be gently captured into Ceres’ orbit. As the spacecraft delivers better images and other data, the science team will be investigating the nature and composition of the dwarf planet, including the nature of the craters and bright spots that are coming into focus.

Dawn has to its credit exploration of a giant asteroid dubbed Vesta for 14 months during 2011 and 2012. Scientists gained numerous insights about the geological history of this body and saw its cratered surface in fine detail.

By comparing Vesta and Ceres, they will develop a better understanding of the formation of the solar system.