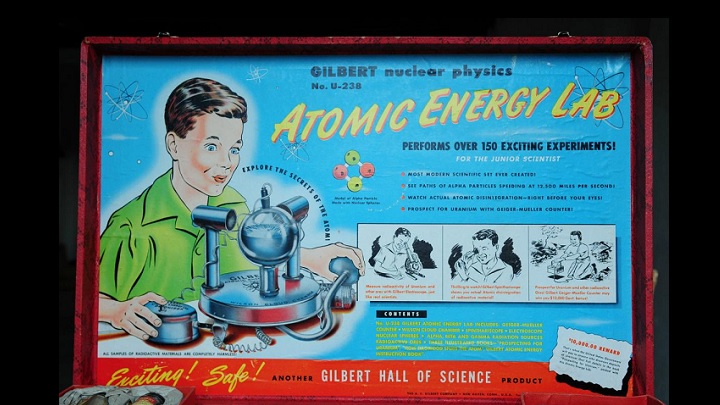 The Gilbert Atomic Energy Lab – dubbed as the world’s most dangerous toy – has gone on display at the Ulster Museum in Northern Ireland. The toy has earned the title of most dangerous toy because it includes four types of uranium ore, three sources of radiation, and a Geiger counter that enables parents to measure just how contaminated their child had become.

The Gilbert Atomic Energy Lab was only available between 1951 and 1952 and was the most elaborate atomic energy educational kit ever produced. The toy was one of the most costly toy of the time retailing at $50 – said to be equivalent to $400 today.

The education set also included a spinthariscope and a cloud chamber that revealed the speeding particles produced by atomic disintegration. The toy came with a government manual titled “Prospecting for Uranium” and parents even had the option to order replacement radioactive sources.

The Gilbert Atomic Energy Lab was being sold as an educational kit “for the junior scientist” and allowed budding nuclear physicists to perform over 150 experiments.

“I think visitors will find it amazing and amusing that this set allowed budding young scientists to measure radioactivity of Uranium in the comfort of their own homes!” said Dr Mike Simms, Curator of Palaeontology at National Museums Northern Ireland.

“Perhaps it wouldnât pass todayâs health and safety standards but it is a perfect fit for the Elements exhibition.”