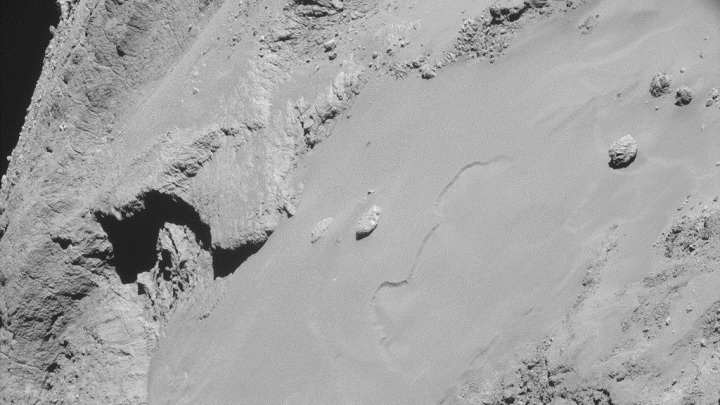 European Space Agency’s (ESA) Rosetta spacecraft has captured and sent back home some stunning high-resolution images of comet 67P/Churyumov-Gerasimenko from just 8.7 km away.

Rosetta has been tracking the 67P for months and the latest set of images of the comet show boulders on the comet’s surface as well as “stunning details of the contrasting terrain.”

The agency said Monday the boulders ranged in size from a few meters (yards) to a few tens of meters, and lie “scattered across the whole surface of the comet.” It says the sun was directly behind Rosetta as the pictures were taken, providing optimal light conditions.

“As well as providing the opportunity to take close-up high-resolution images of the surface, flybys like this also allow Rosettaâs instruments to sample the innermost parts of the cometâs atmosphere, or coma, to understand the connection between the source of the observed activity and the wider coma”, noted ESA. ESA revealed that Rosetta has not commenced a new phase of observations post its closed flyby whereby it will continue to observe the comet at a range of distances, typically between about 15 km and 100 km.