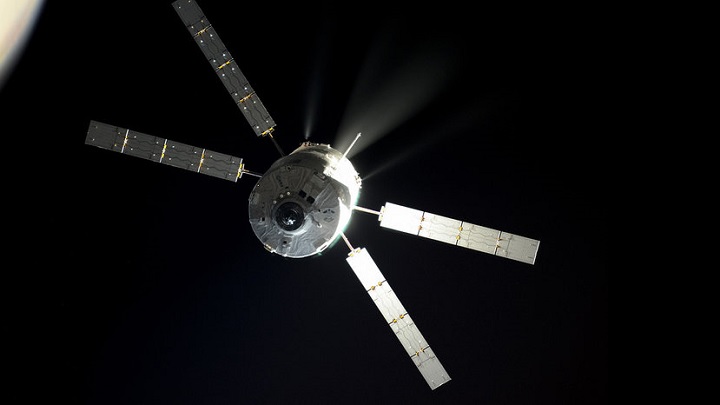 The European Space Agency (ESA) on Sunday revealed that its fifth and last Automated Transfer Vehicle (ATV) left the International Space Station (ISS) after completing its mission and burned up safely over an uninhabited area of the southern Pacific Ocean.

The last of five robot delivery vessels that ESA pledged for the US-led ISS project, the Georges Lemaitre, burned up in a suicide plunge into Earth’s atmosphere, the agency said. ATV’s destruction brings seven-year venture to a successful close, the agency added.

At the control centre in Toulouse, the end of the project was greeted with emotional scenes, according to an ESA tweet, while NASA sent its congratulations, also via Twitter.

The ATV separated from the ISS on Saturday at the end of a six-month mission to bring air, water, food and other essentials to the space station’s crew. The nearly 11 metres (32.5 feet) long and weighing around 20 tonnes at launch, the ATVs have been a testbed for innovative technology.

After launch by an Ariane 5 rocket from ESA’s base in Kourou, French Guiana, they navigated their way to the ISS by starlight and docked automatically. During their mission, they were used for storage and habitation, and their onboard thrusters boosted the altitude of the ISS, which is in low Earth orbit and plucked by lingering atmospheric molecules. [Related: ]

The ATVs were filled with garbage and human waste for their final trip. First launched in March 2008, the five vessels brought up a total of 32 tonnes in resupplies, accounting for ESA’s eight-per cent share of the ISS’s running costs under a barter arrangement. They were all named after inspirational Europeans in space exploration.

âIt is with a feeling of pride that we look back at our accomplishments on the ATV programme,â says Thomas Reiter, Director of Human Spaceflight and Operations .

âWe look forward to applying the experience and knowledge we gained from designing, building and operating five ATV spacecraft with excellent results to future exploration missions using the successor European Service Module of the Orion vehicle.â

The first, the Jules Verne, was named after the 19th-century French forerunner of science fiction, who wrote “Journey to the Centre of the Earth” and “From the Earth to the Moon.”

The following three were named after astronomer Johannes Kepler and physicists Edoardo Amaldi and Albert Einstein. George Lemaitre, a Belgian priest and cosmologist, was father of the “Big Bang” theory of the creation of the Universe.

The cylindrical ATV design is to be adapted to become the service module of NASA’s Orion spacecraft, a rocket-and-capsule successor to the US space shuttle.

Sunday`s operation previously been set for February 27, but was scrapped when a fault developed in one of the ATV’s four power sources.

The end of the ATV programme means that the ISS`s suppliers are Russia`s Progress freighter, Japan`s HII Transfer Vehicle (HTV) and the Dragon and Cygnus craft built by two NASA-contracted private US firms, SpaceX and Orbital Sciences.

Orbital Sciences suffered a major rocket failure in October, forcing an end to its supply missions until further notice.