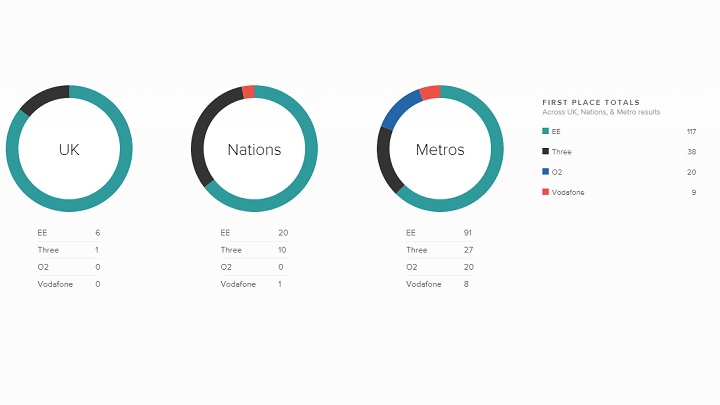 UK’s mobile network landscape will soon see a huge transition with two major acquisitions and launch of two new virtual mobile networks and to give a picture of the current state of affairs, Rootmetrics has revealed the best and worst networks in the game.

The report from Rootmetrics reveals that all four major mobile operators in the UK – Everything Everywhere (EE), O2, Three and Vodafone – have improved in terms of network reliability, mobile internet performance, and speed, but a gap does exist between mobile operators.

The report says that EE continues to hold its lead over its rivals based on its performance across the UK. “EE, which had an early start on its 4G rollout, was especially strong in our network speed testing, clearly distancing itself from all other operators. While EEâs advantage in 4G coverage might be eroding a bit at the metro level (see our metro summary section), at the UK level EE clearly remains the fastest network”, the report notes.

Rootmetrics pegs Three as the second best network in the UK – a close second – the primary reason for which is the network’s reliability.

“An increase of this magnitude is rare to see, and Threeâs jump in the call standings is yet more evidence that the network could become a serious competitor to EEâs lead”, the report says. [Read More: EE, O2, Three and Vodafone pledge to expand mobile coverage to 90% by 2017]

O2 was placed third and Vodafone last in the latest round of evaluation. Rootmetrics notes that Vodafone is currently in the process of expanding its 4G offering and one of the primary reasons behind bad call performance on the network could be a temporary one because of the on going upgrades. If the call performance on the network improves Vodafone is poised to give competition to Three and even EE.

As far as text messaging is concerned, all networks performed well. Call performance is also a category that showed narrower difference in scoring variation between the networks as compared to other categories, the report adds.

“In short, though EE and Three are currently ahead of the pack, the race is likely in a transition phase with changes possible as we move forward in 2015”, the report concludes.

BT recently confirmed that it will be acquiring EE for 12.5 billion and with Three having shown interest in O2, the mobile network landscape in the country will be changing to a great extent. Further, Sky and Carphone Dixons have also revealed that they will soon be launching virtual networks in the country, which will enable for a great competition and possible reduced mobile tariffs across the board.