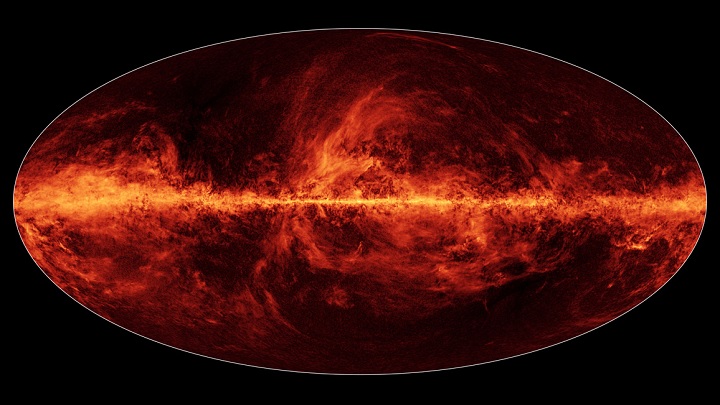 The new map of the Milky Way shows hot gas, dust and magnetic fields mingling in a colorful swirl and it is based on Planck’s work of uncovering the “polarized” light from the early universe across the entire sky. The latest data from Planck also reveals that the contribution from dust in our galaxy is much more widespread than previously thought and revealing complex structures in the galactic magnetic field.

“Planck can see the old light from our universe’s birth, gas and dust in our own galaxy, and pretty much everything in between, either directly or by its effect on the old light,” said Charles Lawrence, the U.S. project scientist for the mission at NASA’s Jet Propulsion Laboratory in Pasadena, California.

Researchers at the Max Planck Institute for Astrophysics developed important software components for Planck and by taking part in the scientific interpretation of the mission data; in particular, they have put forward analysis of the signals from galaxy clusters, from gravitational lensing of the CMB, from galactic dust and magnetic fields, as well as from primordial magnetic fields.

“The cosmic microwave background light is a traveler from far away and long ago,” says Lawrence. “When it arrives, it tells us about the whole history of our universe.”

The big bang 13.8 billion years ago was when matter, space and even time exploded into existence. Previously scientists had thought that the first stars began to shine 440 million years after the big bang. The new results, still to be confirmed by further measurements, suggested that they are 100 million years younger.

However, as the CMB light travelled through space and time it was also influenced by the first stars-and the polarization data now indicates that these started to shine about 550 million years after the Big Bang, ending the “Dark Ages.”

This was more than 100 million years later than previously thought but actually helps to resolve a problem: Previous studies of the CMB polarization seemed to point towards an earlier dawn of the first stars, while very deep images of the sky indicated that the earliest known galaxies in the universe (forming perhaps 300-400 million years after the Big Bang) would not have been powerful enough to succeed at ending the Dark Ages within 450 million years.

The new evidence from Planck significantly reduces the problem, indicating that the earliest stars and galaxies alone might have been enough.

The study is published in the journal Astronomy and Astrophysics.