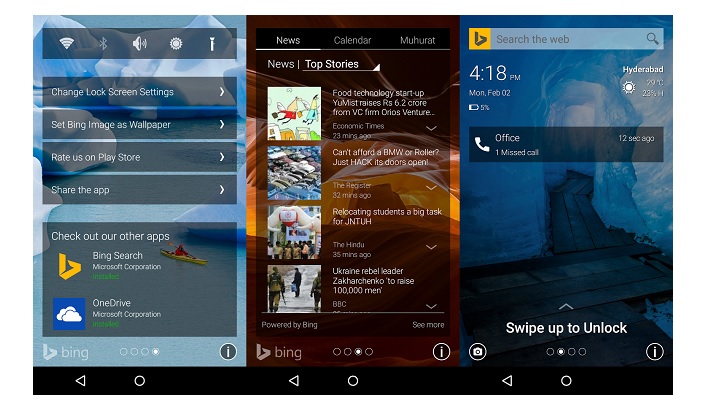 Dubbed Picturesque, the new app allows Android users to change the phone lock-screen background in sync with Bingâs homepage. Users can change the image from past six Bing backgrounds by either simply shaking the device or swiping to the right.

In addition, Picturesque also displays weather forecasts, news, missed calls, and text messages. Users can even toggle Wi-Fi, Bluetooth, brightness, and volume levels, as well as turn on their device’s flash. The app also integrates the Bing search bar on the lock-screen for quick search without the need of unlocking the device.

âPicturesque Lock Screen, a Microsoft Garage project, brings the beautiful Bing home page images to your android lock screen. The app allows you to easily change the image (from the past 6 days Bing homepages) with just a shake of the phone or by swiping to the right. You could see your missed calls and text messages at a glance on the lock screen and also search directly from the lock screen without unlocking your phone. Picturesque also brings your current weather, news and Indian regional calendars on your phone lock screen,â the appâs Google Play Store description reads.

Sized 2.7MB, the Picturesque lock screen app is an initiative of Microsoft’s Garage project. The app supports Android 4.0.3 and above.

Picturesque is currently available for download on Google Play Store.