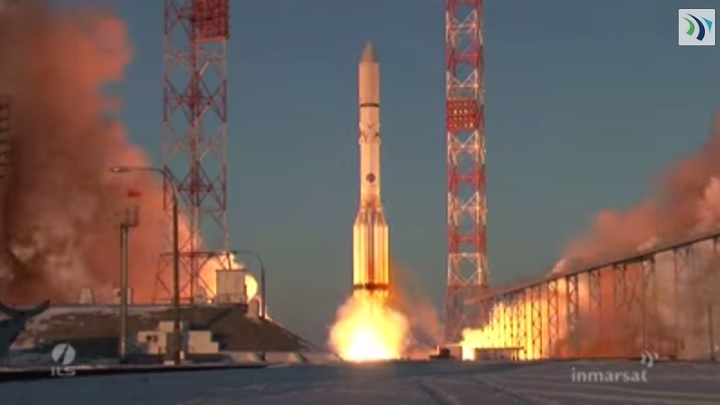 Inmarsat’s second satellite in a series of three – the I-5 F2 – has been successfully launched atop the Russian Proton M launch vehicle expanding the telecommunication company’s Global Xpress coverage. The F2 satellite, built by Boeing, was launched from Baikonur Cosmodrome in Kazakhstan yesterday, at 12:31 GMT precisely and a confirmation of its successful separation came through at 4:02 GMT this morning.

“Through a series of five burns, the rocket carried the orbital unit first to a circular parking orbit, followed by intermediate and transfer orbits, and finally into a super-synchronous transfer orbit”, reads a post on Inmarsat’s website.

In the next phase, the satellite will be guided into its geostationary orbit sometime in March with its testing slated for April.

According to Inmarsat, after an extensive testing of the satellite, the I-5 F2 will deliver Global Xpress services to the Americas and the Atlantic Ocean Region, complementing Inmarsat-5 F1 coverage in the Indian Ocean Region.

Part of a $1.6 billion investment to provide high-speed satellite based broadband, Inmarsat’s third and final satellite is scheduled for launch over the course of next few months and once operational, it will make Inmarsat’s Global Xpress network available globally.

Rupert Pearce, CEO of Inmarsat, said: “The successful launch of our second Inmarsat-5 satellite by Proton is a significant step forward on our journey to deliver the worldâs first globally available, high speed mobile broadband service.”