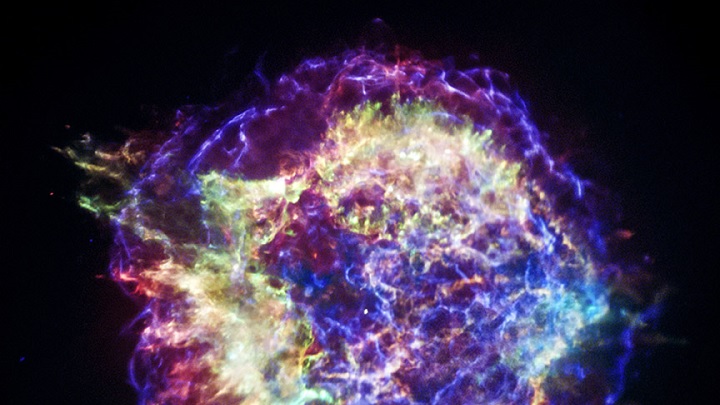 Astronomers have created a 3-D map of a nearby supernova remnant dubbed Cassiopeia A, or Cas A for short, with the help of the astronomical equivalent of a CAT scan revealing a “bubbly interior”. The research has been published in journal Science.

“Our three-dimensional map is a rare look at the insides of an exploded star,” says Dan Milisavljevic of the Harvard-Smithsonian Center for Astrophysics (CfA).

The map was composed by astronomers at Harvard-Smithsonian and Dartmouth College and found it was composed of a collection of about a half dozen massive cavities or “bubbles.” “We’re sort of like bomb squad investigators. We examine the debris to learn what blew up and how it blew up,â explains Milisavljevic. “Our study represents a major step forward in our understanding of how stars actually explode.”

They found that the large interior cavities appear to be connected to, and nicely explain, the previously observed large rings of debris that make up the bright and easily seen outer shell of Cas A. The two most well-defined cavities are 3 and 6 light-years in diameter, and the entire arrangement has a Swiss cheese-like structure. The bubble-like cavities were likely created by plumes of radioactive nickel generated during the stellar explosion. Since this nickel will decay to form iron, Milisavljevic and Fesen predict that Cas A’s interior bubbles should be enriched with as much as a tenth of a solar mass of iron.

This enriched interior debris hasn’t been detected in previous observations, however, so next-generation telescopes might be needed to find the “missing” iron and confirm the origin of the bubbles.