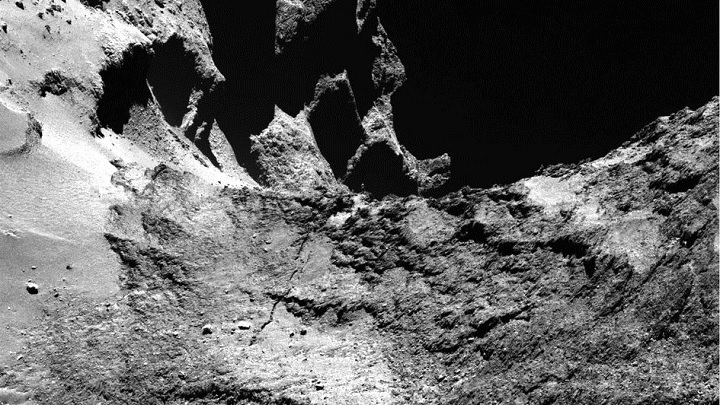 Latest images delivered by Rosetta spacecraft reveal a crack across the comet 67P/ChuryumovâGerasimenko aka C-J and chances are that the comet could come apart.

Cracks on space rock aren’t an uncommon thing, but the crack on C-J matters. The reason is because of the comet’s unusual structure – two lobes connected by a narrow neck. This neck is just 1 km wide and hence a crack hundreds of meters in length present on the neck makes it important.

The comet won’t be on course to its closest approach to the sun for quite a few months to come, but according to the ESA itâs already losing more than 11 kg of gas and dust every second. Scientists are yet to determine whether the crack will worsen or close up as the comet continues to lose weight, but chances are that the comet might break apart into two separate rocks if the stresses on the neck increase.

Comets have always been thought of as more or round structures but C-J is different because of its rubber duck like structure. Some scientists are of the opinion that the comet’s odd shape can be attributed to a collision of two space rocks in distant past. This collision could have fused the rocks together with the crack being a fault line of sorts.

Scientists have never been able to get their eyes this close to a comet and so it’s possible that such crack are a common occurrence in comets.

In related news ESA scientists are mulling to send Rosetta on a close flyby just 6 km above the surface of the comet in a bid to find Philae lander. The flyby will occur or the 20 m x 200 m patch believed to be the landing zone of the lander.