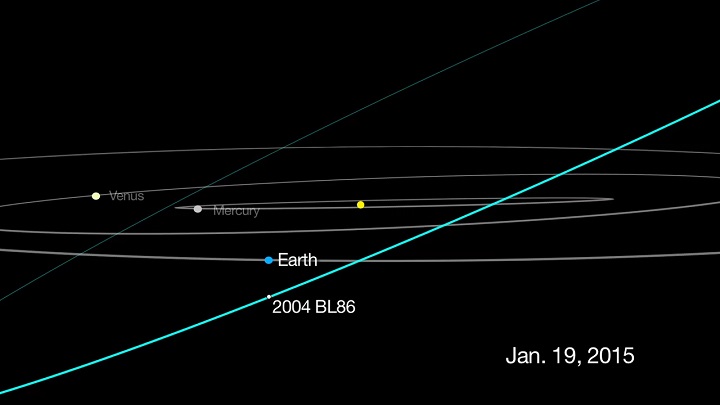 Asteroid 2004 BL86 will be flying past Earth and it will be the closest to our planet on January 26 and scientists over at NASA are expecting the asteroid to reveal surprising data.

At just 745,000 miles (1.2 million kilometers) from Earth, Asteroid 2004 BL86 will be flying at a safe distance. NASA has revealed that its Deep Space Network antenna at Goldstone, California, and the Arecibo Observatory in Puerto Rico will be observing the asteroid and attempt to gather scientific data and radar generated images during the data around its closest approach to Earth.

Stargazers will have a unique opportunity to observe an asteroid at such a close distance and anyone with a telescope or a powerful pair of binoculars will be able to observe it next week.

“And while it poses no threat to Earth for the foreseeable future, it’s a relatively close approach by a relatively large asteroid, so it provides us a unique opportunity to observe and learn more”, said Don Yeomans, who is retiring as manager of NASA’s Near Earth Object Program Office at the Jet Propulsion Laboratory in Pasadena, California.

Yeomans adds that asteroids are not only important for provide Earth with building blocks of life and much of the water as we know it, they are important because in future they will be key to deep space travel.

“When we get our radar data back the day after the flyby, we will have the first detailed images,” said radar astronomer Lance Benner of JPL, the principal investigator for the Goldstone radar observations of the asteroid.

“At present, we know almost nothing about the asteroid, so there are bound to be surprises”, Benner adds.