Check this out: True colour photo of Saturn’s moon Dione 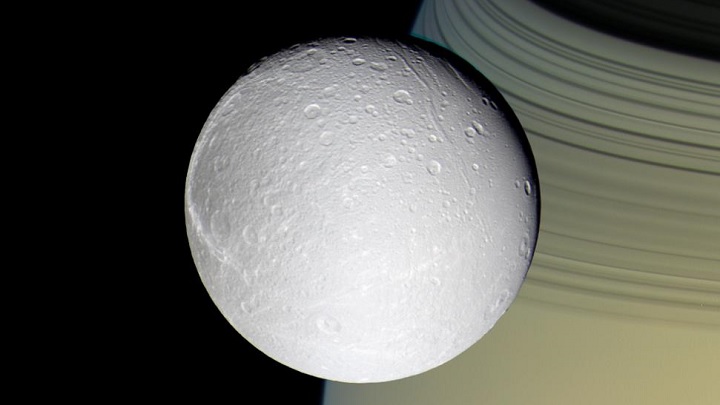 The Cassini-Huygens mission managed to capture some stunning images of Saturn and its moon Dione and the one shown above is one of the best photos we have seen so far of the icy Saturnian satellite.

The images were taken on October 11, 2005, using blue, green and infrared (centered at 752 nanometers) spectral filters to create a colour view of Dione in a bid to approximate the scene as it would appear to the human eye.

The Cassini spacecraft took the photographs from a distance of “approximately 39,000 kilometers (24,200 miles) from Dione and at a Sun-Dione-spacecraft, or phase, angle of 22 degrees”.

The image shows Dione [full image below], part of Saturn and its rings (as horizontal stripes). “The spacecraft was nearly in the plane of the rings when the images were taken, thinning them by perspective and masking their awesome scale”, NASA explains. “The thin, curving shadows of the C ring and part of the B ring adorn the northern latitudes visible here, a reminder of the rings’ grandeur”, NASA adds.