Here’s what you can do to spot Mercury 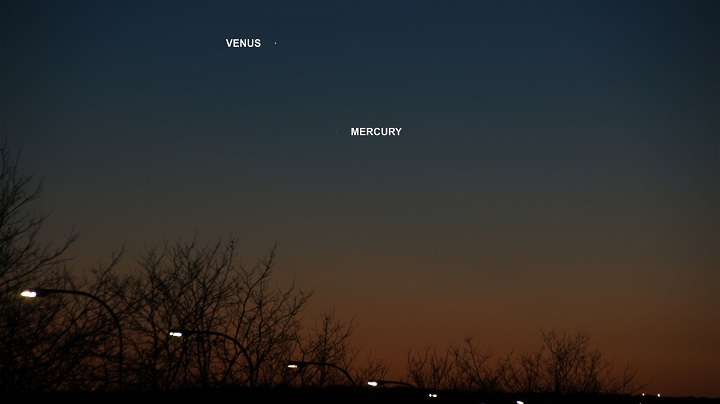 January has had a fair share of celestial events includingÂ Comet Lovejoy passing closest to Earth, discovery of Earth-like planets and now there is a rare opportunity to spot Mercury in the night sky above East Lancashire.

Mercury is the smallest planet of our solar system and is a fast-moving one with an elliptical orbit of just 88 days and an average distance from the Sun at 58 million km. Because Mercury never strays far away from the Sun, it makes it very difficult to spot the planet even at its greatest angular distance from the Sun.

However, during the first half of January if the weather conditions are favourable and you are in East Lancashire, UK you should be able to observe the planet Mercury. You will find it in the same patch of sky, in nearly exactly the same direction, as its much brighter neighbour Venus.

Venus is a much brighter planet making it easily visible to the unaided eye in clear sky conditions and once you do, you will be able to spot the elusive and much fainter Mercury thanks to the rare close alignments. To spot Mercury, first identify Venus, then using a pair of binoculars or a low-end telescope, look at Venus. In the same filed of view you will be able to spot Mercury, within a degree or so of Venus [Image embedded above. Credit Derekscope]

If you find yourself in the region and have a cloudless view of the horizon towards the southwest after sunset, you will see Venus and Mercury together in the evening twilight between about 4.30 pm and 5 pm.

During January 8 to 12,Â  the two planets will be less than 1 degrees apart and they willÂ gradually separate in the nights that follow, with Mercury slowly moving away to Venus’s right.