Sharpest ever composite image of Andromeda taken by Hubble 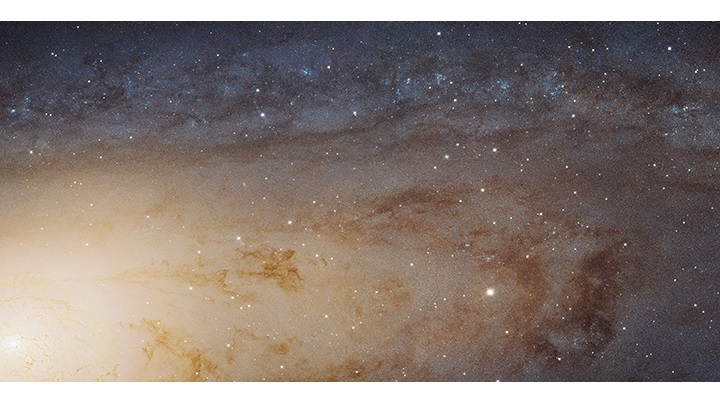 Hubble Space telescope has snapped a portion of the Andromeda galaxy (M31) and the image is the sharpest large composite image ever taken of our galactic neighbour, NASA has revealed.

“The largest NASA Hubble Space Telescope image ever assembled, this sweeping birdâs-eye view of a portion of the Andromeda galaxy (M31) is the sharpest large composite image ever taken of our galactic next-door neighbor”, says NASA in a press release.

Andromeda is a whopping 2 million light-years away and despite this huge distance, the Hubble telescope has managed to 61,000-light-year-long stretch of the galaxyâs pancake-shaped disk while also resolving individual stars – over 100 million.

The reason his composite image is significant is that Astronomers have never been able to see individual stars inside an external spiral galaxy over such a large contiguous area. “Most of the stars in the universe live inside such majestic star cities, and this is the first data that reveal populations of stars in context to their home galaxy”, explains NASA.

Hubble has managed to trace the densely packed stars extending from the innermost hub of the galaxy seen at left through to galaxy’s of stars and dust to the sparser outer disk.

Looking at the image, one finds large groups of young blue stars which hint at locations of star clusters and star-forming regions. The stars bunch up in the blue ring-like feature toward the right side of the image. The dark silhouettes trace out complex dust structures.

“The panorama is the product of the Panchromatic Hubble Andromeda Treasury (PHAT) program”, NASA adds. Hubble managed to take the images of Andromeda by viewing it in near-ultraviolet, visible, and near-infrared wavelengths, using the Advanced Camera for Surveys and the Wide Field Camera 3.