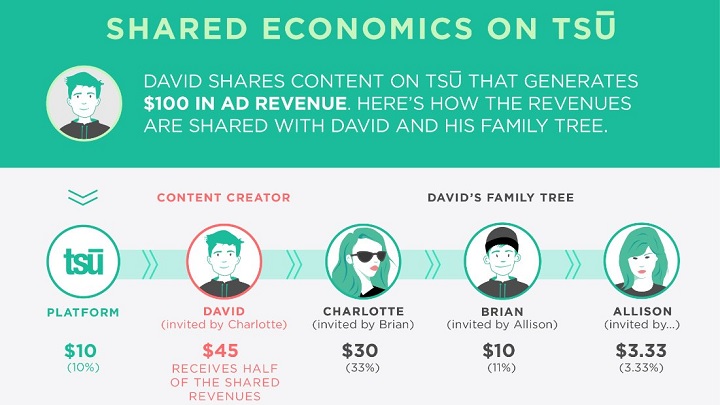 Budding social network Tsu on Thursday announced it has crossed a whopping one million user milestone within just five weeks.

This is a great achievement for a new social network to cross the milestone in the first five weeks, considering the fact that even social networking giant Facebook took almost ten months to record one million users on its platform.

Tsuâs global rank on Alexa, the measure of how popular the site is, has raised to 5,000, up from below 11,000 recorded in October.

âTs? is a new social media network similar to Instagram, Facebook, and Twitter except for one major difference. It comes with a payment platform, so they share the revenue made from their users,â reads the social networkâs official page.

Tsu claims that unlike other social media sites, which makes use of their usersâ content to earn money without sharing any of the royalties with them, it shares 90 percent of its total revenue from advertising and sales to its content creators and their networks.

The social networking platform also encourages users to donate their royalties in favor of charities by using the âTransfer Fundsâ button on their wall.

Founder and CEO Sebastian Sobczak claims that Tsu is the âfirst socially responsible social network … paying content royalties for the commercial use of content creatorsâ likeness, image and workâ.

Sobczak says the social platform intends to âcollaboratively change the lives of people for the better with these new found royalty streamsâ.

In order to sign up with the social network, interested ones will need an invite from an existing Tsu user, or a generic invite from Tsu itself.