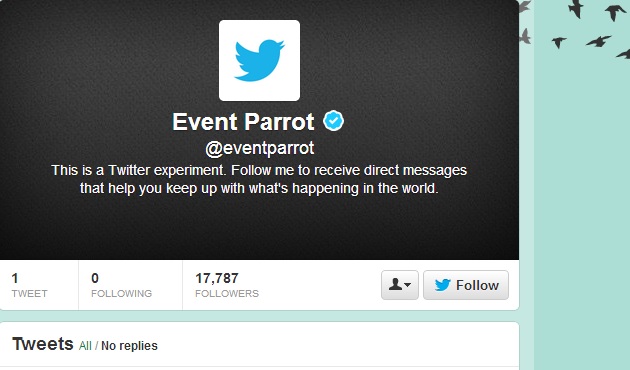 Twitter is one of the most sought after go-to resource for breaking news and real-time information and it seems that the microblogging platform now wants to cash-in on its popularity as an experimental @eventparrot account has emerged using which Twitter is testing its breaking news system.

The @eventparrot account popped up on Twitter; is being owned by the company itself; has been modeled after the recently announced @magicrecs account and most of its initial followers were Twitter executives and employees including Dick Costolo, Evan Williams, and Jack Dorsey. The profile of the @eventparrot account reads, âThis is a Twitter experiment. Follow me to receive direct messages that help you keep up with what’s happening in the world.â

Twitter hasnât officially commented on this news, but since the account was opened @eventparrot has managed to garner 17,718 followers as of this writing. In its first ever tweet, the @eventparrot said, âHello World! So happy to keep in the know about what’s happening in the world. Please send us feedback by replying to the direct messages.â

The idea behind the new experimental account is simple. Twitter will likely take away the burden off your shoulders regarding who to follow by ensuring that @eventparrot sends out links to news items that are being read / noticed by people you are connected to.