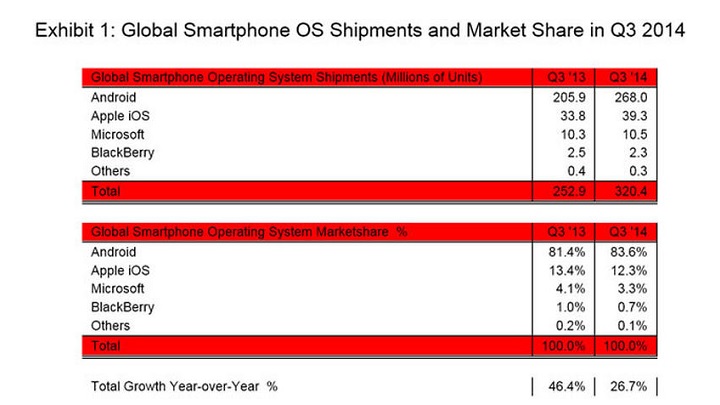 Android ran on 84 per cent of devices shipped during Q3 2014, a new report by Strategy Analytics has claimed and the research firm hints at the possibility that Android’s market share numbers may have peaked and may never breach the 85 per cent mark.

“Unless there is an unlikely collapse in rival Apple iPhone volumes in the future, Android is probably never going to go much above the 85% global market share ceiling.”

If we look at market share of other players in the smartphone vertical, Apple’s iOS accounted for 12 per cent share followed by Microsoft’s Windows Phone, which managed a 3 per cent share. Finished off the tally was BlackBerry with 1 per cent share to its name.

If you look at the exhibit above, global shipments of Android-powered smartphones stood at 268 million, up from 206 million year-over-year helping Android grab an 84 per cent share as compared to 81.4 per cent a year ago during the same period.

The market share peaking forecast isn’t all too bad for Google considering that the same research firm has claimed a 12 per cent increase in smartphone shipments for the next year. And if this materialises, Google is set to benefit and so will other players.

One thing that Google has working for itself is the recent launch of Android One – a new programme under which it enjoys total control over the operating system. With the launch of Android One in budget savvy markets like India, Google will not only be able to address the increasing Android forking, it will also be able to answer the needs of a niche low-end smartphone market.

That said, Mawston points out the challenges for Google:

“Its low-cost services and user-friendly software remain attractive to hardware makers, operators and consumers worldwide. However, challenges are emerging for Google. The Android platform is getting overcrowded with hundreds of hardware brands, Android smartphone prices are falling worldwide, and few Android device vendors make profits.”