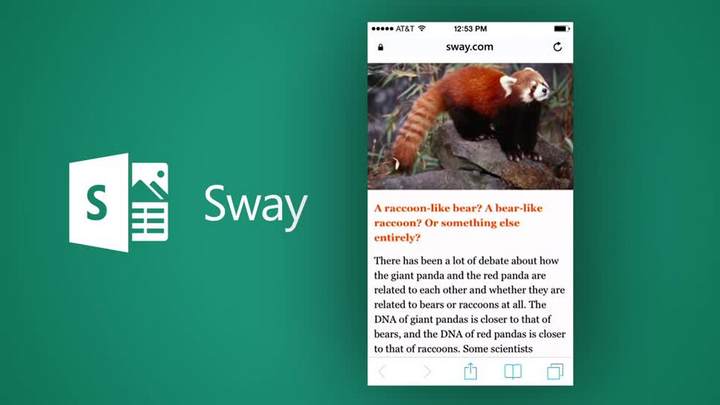 Built on Microsoft’s Azure cloud platform, Sway allows users to create interactive and easy web shareable projects either through a normal web browser like Chrome, Safari, Firefox, or Internet Explorer or through any desktop or smartphone app. It enables users to make presentations by dragging and dropping pictures and videos from the web, like YouTube or Facebook, into the app.

Sway also allows users to select from a variety of pleasant and easily adjustable layout types – traditional linear, vertical and horizontal. The final output that users create using Sway is called “Sways.” Users can easily share Sways with others through links as well as on various social networking websites, including Facebook and Twitter.

Unlike other Office suite applications like Word, Excel and Power Point, the new Office application doesnât have a specific file extension as it is completely a web-based application. While users’ sways are stored in Microsoft’s Azure cloud, pictures and videos used to create Sways are saved in Microsoft’s OneDrive.

“Swayâs built-in design engine takes the hassle out of formatting your content by putting all of it into a cohesive layout as you create. This means that from the first word, image, Tweet, or graphic you add, your Sway is already being formed for you,” noted Microsoft in a blog post, along with a YouTube video showing more about the way Sway works.

For now, users can only get the preview version of the new service at Sway.com on the Web. The Redmond will eventually release Sway native apps for iOS, Android and Windows Phone in the coming months.