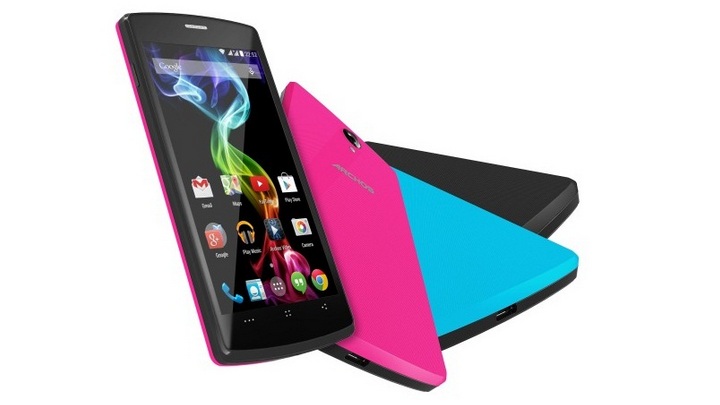 Just days before the IFA 2014 in Berlin, Archos has taken the wraps off a range of Android and Windows devices – two new tablets and three new smartphones.

The company hasn’t revealed any details about the availability of the devices, but has listed the prices of each device in Â£ (GBP), indicating a UK launch.

Coming to the specs, first in the list Archos 45c Platinum sports a 4.55-inch FWVGA (480×854 pixels) display and packs a 1700mAh battery. It is powered by a 1.3GHz quad-core processor coupled with 512MB of RAM along with 4GB of internal storage (expandable by microSD slot). The device runs Android 4.4.2 KitKat out-of-the-box, and features a 5-megapixel rear camera with LED flash and a 2-megapixel front-facing camera.

Next in the list is the Archos 50b Platinum, with dual-SIM support, powered by a 1.3GHz quad-core. The device packs a 1900mAh battery, an 8-megapixel rear camera with LED flash, 512MB of RAM, a 2-megapixel front-facing camera, and 4GB of built-in storage (expandable).

Next up is the Windows Phone powered Archos 40 Cesium smartphone, said to pack a quad-core Qualcomm Snapdragon 200 processor. The device will feature an ultra-clear 4-inch display and will be available in 3 colour variants – Yellow, Blue and Black.

Lastly, the Archos 80 Cesium running Windows 8.1, will sport an 8-inch IPS screen with a resolution of 800 x 1,280 pixels and packs an unknown Intel quad-core processor.

The company has revealed only a few specifications about the Windows devices, while promising that the upcoming products will deliver âamazing performance, superior design and impressive affordability.â

The 45c Platinum and 50b Platinum smartphones will come with a price tag of Â£99 and Â£119 respectively, while the Archos 101 Oxygen will cost around Â£199.

In case of the Windows device, the Archos 40 Cesium smartphone will be priced at Â£79, while the Archos 80 Cesium tablet will be Â£129.

The Android and Windows Phone smartphones will hit the market shelves by next month, while both the slates will be available only by October.