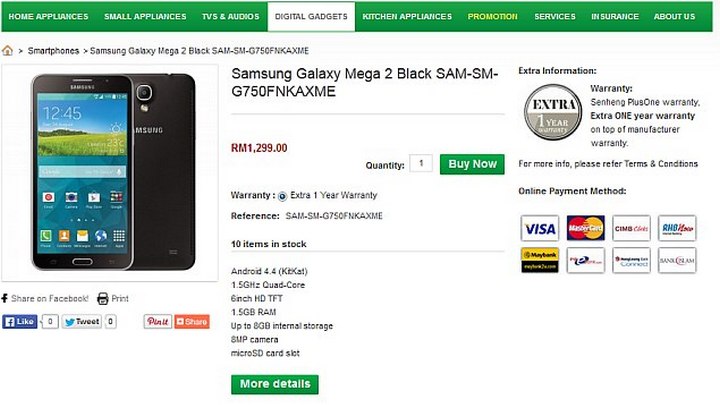 While Samsungâs upcoming smartphone Galaxy Mega 2 is awaiting an official launch, a Malaysian retailer has already listed the large screen phablet up for sale in the region at MYR 1,299.

The device has been spotted on the Malaysian retailer SenHengâs website along with specifications for RM1,299 or Â£248. The website also cites an option for Maybank credit card holders to purchase the device in 24 interest-free monthly payments of RM51.88, along with a 10,000mAh battery bank and a car charger.

As per the listing, the Galaxy Mega 2 handset features a 6-inch TFT HD (720 x 1,280 pixels) display, powered by a 1.5GHz quad-core processor paired with 1.5GB of RAM, 8GB of built-in storage expandable via a microSD card. The smartphone runs on the latest Android 4.4 KitKat out-of-the-box.

The Galaxy Mega 2 packs an 8-megapixel rear camera and a 2.1-megapixel front-facing camera for selfies. The device is available in 2 colour options â black and white. No further specifications are listed by the Malaysian retailer.

As the listing specifications does not match the earlier rumours which hinted at a 2GB of RAM and a 12-megapixel rear camera, the report has to be taken with a grain of salt until Samsung officially unveils the Galaxy Mega 2.

It is expected that Samsung might showcase the new Galaxy Mega 2 smartphone alongside the Galaxy Note 4 at IFA 2014 in Germany on September 3.