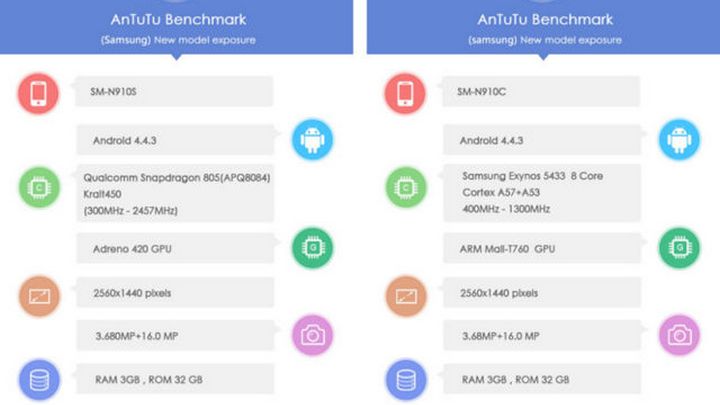 Just weeks before Samsung is expected to unveil its flagship phablet âGalaxy Note 4′ at the IFA 2014 Berlin event next month, a newly leaked AnTuTu benchmark screenshot reveals a list of the phabletâs features ahead of the official launch.

According to AnTuTu benchmark test screenshots posted on Mobinfo, Samsung will be releasing two Galaxy Note 4 models, one with a Qualcomm Snapdragon 805, while the other with an Exynos 5433 chipset.

The Galaxy Note 4 running on Qualcomm Snapdragon 805 SoC will be packed with a 2.5GHz quad-core Krait 450 processor coupled with Adreno 420 GPU, while the one running the Exynos 5433 chipset will boast two quad-core clusters (Cortex A57 and Cortex A53) with a maximum frequency of 1.3GHz, and an ARM Mali-T760 GPU.

The Exynos 5433âs scored better in tests with 40,300 points as compared to the Snapdragon 805 model which managed to score just 37,780 points. However, this high score places the Exynos 5433 SoC second only to the NVIDIA Tegra K1 in terms of performance.

As far as other specifications are concerned, both the Galaxy Note 4 models are expected to feature a 5.7-inch 1,440 x 2,560 QHD resolution screen, 3GB RAM and 32GB of internal memory, with Android 4.4.3 OS. The device is also expected to pack a 16-megapixel rear camera, and a 3.8-megapixelÂ front-facing camera.

Samsung, which is yet to officially confirm any details concerning the upcoming phablet, is expected to launch the Galaxy Note 4 during a special event at IFA 2014 in Berlin, Germany on 3 September.