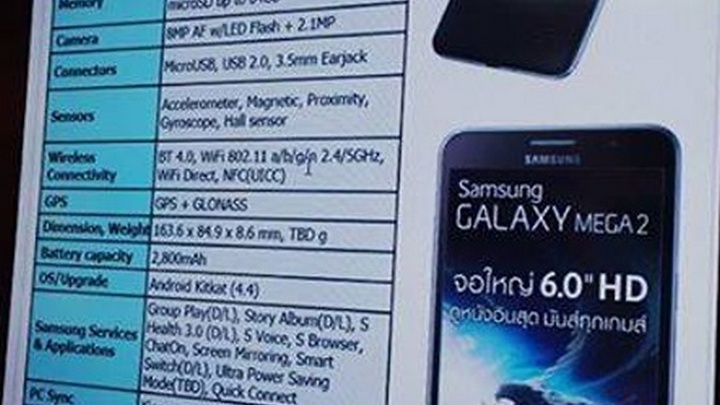 Samsung is all set to launch its next large screen smartphone, the Samsung Galaxy Mega 2 next month, at IFA 2014 in Berlin alongside Galaxy Note 4 phablet, claims a new report.

Powered by a 1.2GHz Qualcomm Snapdragon 410 CPU, the Galaxy Mega 2, codenamed as “Vasta,” is expected to pack 1.5GB of RAM, 16GB of internal memory expandable up to 64GB via a microSD card, a 13-megapixel rear camera, a 2.1-megapixel front-facing camera as well as a high-capacity 2,800 mAh battery. The smartphone will run Googleâs latest mobile OS version – Android 4.4 KitKat operating system out of the box.

As per leaked specs, the phablet will support LTE connectivity and VoLTE and will include FM Radio, Wi-Fi, Bluetooth 4.0 and GPS with A-GPS and GLONASS.

The handset is also expected to include new software features that will make it easier for users to use the device with one hand like the “Easy Side Panel” feature that will see on-screen navigation buttons placed on the left or right side of the display.

However, there isnât any official word from Samsung related to the Galaxy Mega 2.