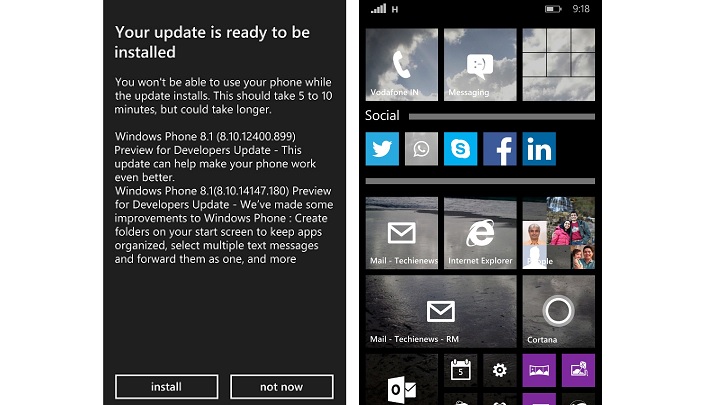 Microsoft has reportedly started pushing out Windows Phone 8.1 update 1 or GDR1 developer preview to all those who have developer access.

Windows Phone 8.1 update 1 packs quite a few features including Cortana for new regions, Live Folders, SMS merging and forwarding, among other things and according to Microsoft the update will be available soon; however, those with developer preview access should see the update hitting their smartphones any time now.

Update 1 brings with it Cortana to UK, and China in beta while those in Canada, India and Australia will be getting the alpha version of the digital assistant. Cortana will be known as âXiao Naâ in China.

Cortana in UK, like in the US, will also provide local data on sports, the London Stock Exchange, commuter conditions, and a lot more and all these information will be backed by Bing, Microsoft had said while revealing details about the update.

Read More: Leak suggests HTC One M8 Windows Phone 8 smartphone is for real and could be a killer

Using the Live Folder option, users can organise apps on start screen into folders as per their preferences. To organise apps into folders, all you need to do is drag a tile over another tile and name the folder.

The update also brings with it the ability to select multiple SMS for deletion and forwarding easing out SMS management tasks.