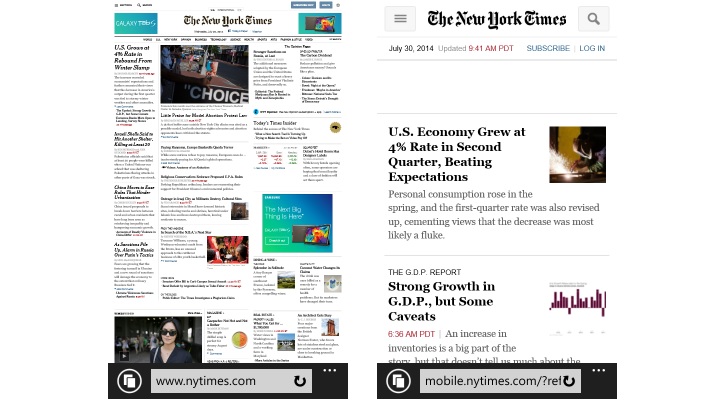 The latest update for Windows Phone 8.1 brings lot many features with it including the much talked about Cortana, but beyond that it also fixes one of the most annoying bugs in Internet Explorer 11 whereby the browser delivered a desktop version of the site even if a mobile optimised version was available.

âBased on your feedback, we pursued a web experience for IE users consistent with what is available on iOS and Android devices â even where this meant we would be adding non-standard web platform featuresâ, announced Microsoft in its IE blog. âWe believe that this is a more pragmatic approach to running today’s less-standardised mobile web.â

Microsoft extensively describes the internal testing it did on over 500 sites with screenshots showing the before and after behaviour of the updated Internet Explorer 11 on Windows Phone 8.1.

In its analysis Redmond has identified key issues that result into displaying of a desktop-optimised version of the site instead of a mobile one. These include faulty browser detection; use of old WebKit-prefixed features instead of standards; use of Internet Explorer-unsupported features; and interoperability bugs and implementation differences.

Microsoft revealed in its blog post that it managed to resolve all of these issues by changing the User Agent string that allows browsers to identify themselves to web servers â by adding “like Gecko” to the code.

Further, Microsoft also âadded a mapping of popular webkit-prefixed APIs to the standards based support already part of IE11â. What this does is that for sites sending out WebKit code the APIs are translated into standard based code dynamically as the page loads.

Microsoft also added âsmall number of non-standard features popularised by Apple on the iPhone in widespread useâ allowing a page to modify the styling to a particular element so as to match it to that of a native application.

All-in-all Microsoftâs efforts to resolve this annoying aspect of IE 11 will benefit it in the long run while creating a positive impact in current Windows Phone users.

You can find detailed explanation from Microsoft here.