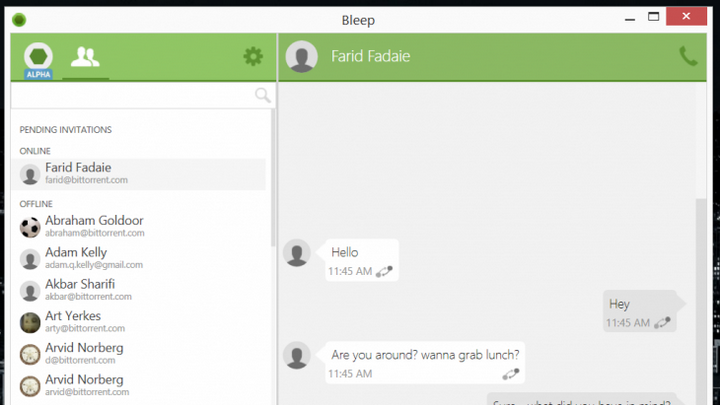 In a world strewn with numerous chat apps, BitTorrent has unveiled its chat app dubbed Bleep which promises encryption of the instant messages shared on it.

Privacy has always been a concern while using chat clients, as the messages are sent through a centralized server, breaking into which can expose the personal data and messages of the members using the service.

BitTorrentâs Bleep is to make a difference by using decentralized servers to send across the messages and even gives users the option to sign in anonymously. The company has launched a pre-alpha version which can be downloaded by sending a request to BitTorrent.

Those who have enrolled already will receive an email with a link in it where they can download the app. Bleep is currently available only for Windows 7 and 8 users and upon testing and improvising, it will be made available for the other platforms.

Users are given the option to sign in with their email address or phone number in addition to being able to sign in anonymously in which case there will not be any kind of personal information registered anywhere. Testers can also import contacts from their Google address books and invite contacts to join.

As opposed to regular chat clients, BitTorrent uses decentralized servers to transfer messages, which often poses the challenge of sending the message to the right recipient as both the addressee and the content of the message are encrypted.

Bleep senior product manager Jaehee Lee explained that the company uses the same kind of Distributed Hash Table which is used for the torrents and it discloses the recipient alone while keeping the content encrypted.