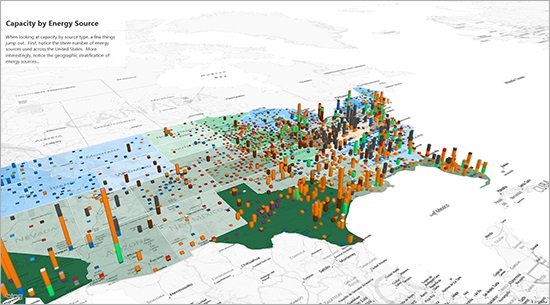 Microsoft has updated the business intelligence (BI) service within its Office 365 cloud based productivity suite in a bid to help its customers track down business related data with ease.

Excel â one of the major components of Office 365âs BI â received a Power Map update today which enables users to plot data onto Bing maps using color codes rather than pie charts of bar charts. Microsoft describes Power Map as a 3D visualization tool which can be used along with Excel to map, explore and interact with geographical and temporal data.

Microsoft notes in a blog post, “Power Map now enables customers to create videos that can be optimized for a number of devices and shared through social media, PowerPoint slides, and Office 365.”

Microsoft has also incorporated improvements to its search feature by allowing users to type in natural language queries. Microsoft says that users can type in questions pertaining to business intelligence and the system will return interactive charts and visual representations based on the semantic meaning of what was typed.

The natural language queries, dubbed Power Query, include a number of expanded datasets like Windows Azure marketplace, and Wikipedia among others.

Check out the video below: