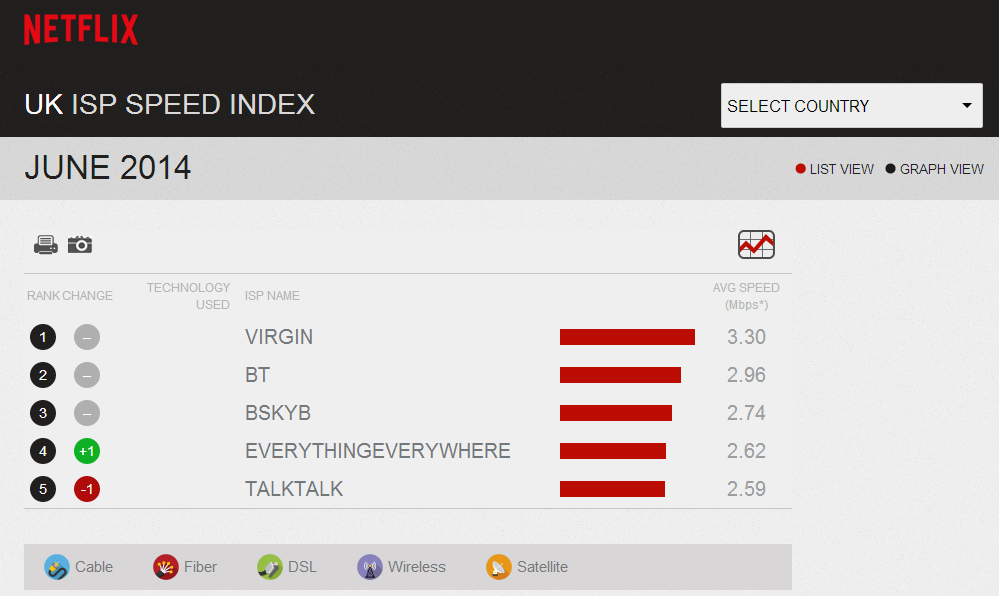 Netflix has released its ISP Speed Index for the month of June with Virgin Media holding the top spot in UK ISP speed rankings.

The Netflix ISP Speed Index reveals which internet service provider offers the fastest speeds. The ISP Speed Index is calculated based on data from more than 48 million worldwide users who view over one billion hours of shows and movies per month.

Virgin Media offered an average speed rate of 3.3 megabits per second (Mbps) to become the number one internet provider in the UK. Ranked second on the list was BT with an average speed of 2.96Mbps followed by Sky in third position with 2.74Mbps speed. EE with 2.62Mbps and TalkTalk with a speed of 2.59Mbps stood at the fourth and fifth positions.

Back in April 2014, BT topped the UK ISP speed index, however Virgin Media has since been overtaking BT as the lead.

Verizon DSL dropped to the bottom of the US rankings with a 13 percent fall in average speed declining from 1.05Mbps in May to 0.91Mbps this June. Meanwhile, speed of Verizon FIOS also dropped by around 17 percent from 1.9Mbps to 1.58Mbps over the same time period.