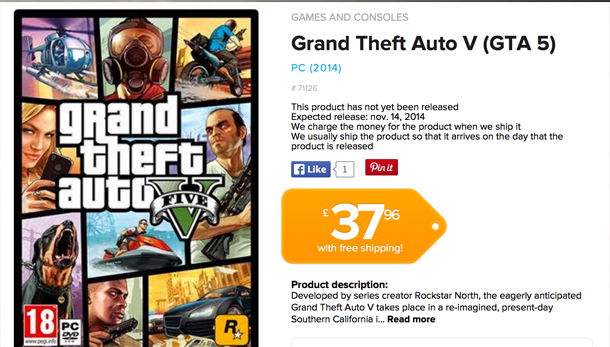 Rockstar confirmed Grand Theft Auto V for PC during this yearâs E3, but failed to give a definite release date except for a broad release timeline of autumn.

However, at least one retailer in Europe couldnât keep the release date under wraps and through a listed on its website has stated that GTA V for PC will land on November 14.

Considering that European launch always follows that of a US launch, chances are that the game may show up in the US earlier than November 14.

The release date falls on a Friday and as Europe launches normally happen on that day, the placeholder might just hint at a strong possibility. However, nothing can be said for sure considering that it is and âexpectedâ release date.

If we look at the planned releases near the holiday season, there are quite a few titles lined up from different publishers. October will see launch of Evolve, Battlefield Hardline, Dragon Age: Inquisition, Alien: Isolation among others. November will see releases of Far Cry 4, Call of Duty: Advanced Warfare and The Crew.

Now considering these launches Rockstar may be in for a fair bit of competition if it does go ahead with a November 14 launch.

Along with the PC version, Rockstar will also be releasing GTA V for Xbox One and PlayStation 4.