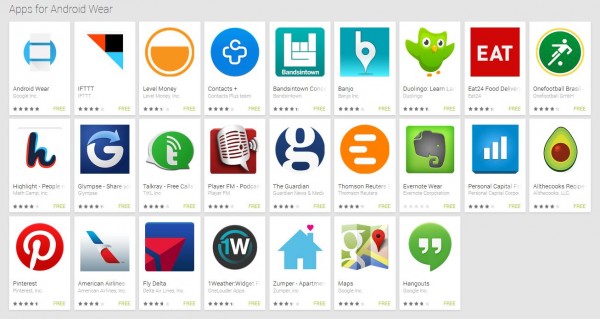 Following the launch of Android Wear devices at the I/O event, the first batch of apps including third-party apps like Duolingo and Pinterest, have landed in a dedicated section in the Google Play store.

Google Developers account in an official tweet announced the availability of the collection of 24 apps for Android Wear in the Play store. The number of apps is expected to grow rapidly in the coming weeks as the software developer kit (SDK) is open and available to developers.

The Android Wear app allows smartwatch owners to configure various settings including notifications preferences, voice actions for alarm or agenda on the smartwatch. However, the app is expected to have more functionality in the future.

Smartwatch owners have to download the official Android Wear app first to link their wearable with their smartphone and update to Google Play Services 5.0, the latest update announced at the I/O event.

With the new version of Google Play services, users can experience improved game engagement, create game profiles, sync progresses of games automatically across all the Android devices for easy controlling, with their smartwatch. The other changes include offline support for Google Drive, subtitling support for Chromecast, and dynamic security for Google Play Services.