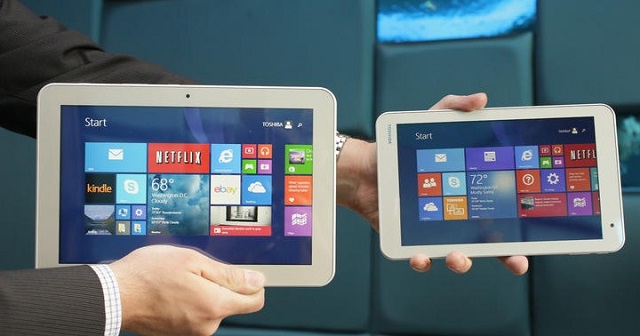 The original Toshiba Encore Windows 8 tablet has proved to be a successful device, especially thanks to its affordable price and more than decent tech specs. And now Toshiba is putting on the market the next generation.

The Toshiba Encore 2 will be arriving in 8 inch and 10.1 inch models, having a distinctive design and sporting a Satin Gold chassis with slim bezels alongside rounded edges which is said to make the tablets much easier to keep in hand and grip.

The Encore 2 tablets will be available for purchase in the US in early July with a price of $199.99 for the 8-inch model and $269.99 for the 10.1-inch model; European customers will get the devices this fall.

The two new Windows 8.1 tablets from Toshiba arenât actually that different, and size is obviously the biggest differentiating factor here, which also results in a cheaper price for the 8-incher.

The tablets come preloaded with apps like Xbox Music and Video, Kindle Reader, Skype and a one year subscription to Office 365, which would otherwise cost you at least $99, and thatâs with the personal plan.

Te 10-inch Encore 2 is 0.4 inches thin and weighs just 1.2 pounds while the 8-inch version weighs less than a pound.

Both feature a bright HD (1280Ã800) multi-touch display. According to Toshiba, they are able to offer up to a 10-hour battery life for general usage and up to 8 hours of video playback.

These tablets are good for music lovers, as well, as they come with stereo speakers plus Dolby Digital Plus audio. Also, you can wirelessly project your content to your HDTV with a built-in Micro HDMI port and wireless display support.

The tablets have another specific app, called TruCapture, which lets the integrated cameras capture and correct snapshots of whiteboards, blackboards and books. You can continue reading the entire article here.

Reproduced with copyright permission from WindowsReport.