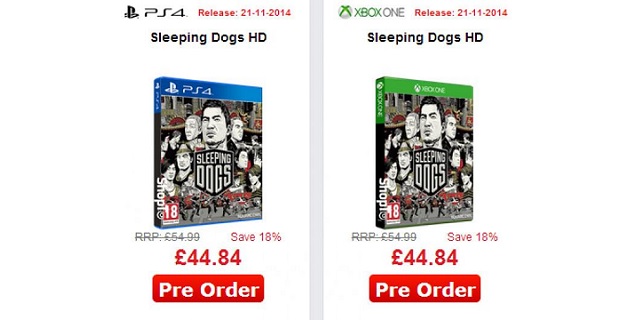 One of the major retailers in the UK, ShopTo, briefly posted a listing of Sleeping Dogs HD â a HD remake of the hit 2012 Sleeping Dogs from Square Enix before pulling it.

The listing confirmed that the game will be released for Xbox One and PS4 with a November 21 launch date and will cost Â£44.84 (down from an RRP of Â£54.99), but apart from that there wasnât any other information.

Square Enix never talked about an HD remake of the game and all we knew was that it will be launching a follow-up to Sleeping Dogs which was named Triad Wars. This information was also available in the form of a teaser as early as December 2013.

However, there isnât a lot of buzz surrounding Triad Wars either and all we know is that it is being developed by United Front Games.

Sleeping Dogs has been a huge success
[Source: CVG]