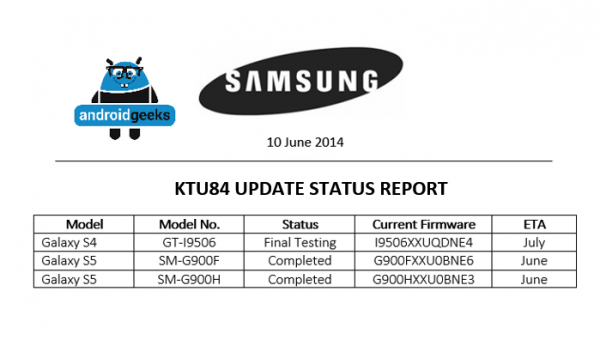 Samsung is reportedly all set to roll out the Android KitKat 4.4.3 update for the Galaxy range with its flagship Galaxy S5 listed as the first to get update this month, followed by the previous generation Galaxy S4 to receive it in July.

According to the leaked Samsung Android KitKat update schedule document, reported by AndroidGeeks, the update is ready for deployment and it will start arriving “very soon,” with unlocked Samsung Galaxy S5 models including Snapdragon (SM-G900F) and Exynos (SM-G900H) to be the first ones to receive. Galaxy S4 devices are slated with a July timeframe, with no specific release date provided.

This falls in line with the previous rumours pointing to the wireless carrier US Cellular’s mention about the update on its website. However, Samsung has not yet officially confirmed the Android 4.4.3 update for Galaxy S5 as well as Galaxy S4.

Android KitKat 4.4.3 is expected to be a minor update with a number of bug fixes, performance boosts, and a completely redesigned dialler app sporting card-based interface and a new colour scheme.

Google has already pushed out the Android 4.4.3 update for the Nexus line-up last week, while Motorola smartphones and various Google Play Edition devices have also received the update.