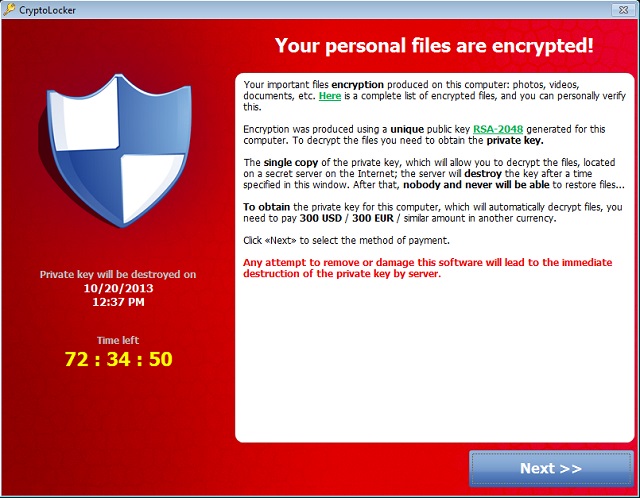 The National Crime Agency UK has issued a warning asking Brits to brace themselves for a huge cyber attack that may strike their computers in two weeksâ time.

US officials managed to disrupt a major botnet controlled by the perpetrators of the GOZeus malware and has even managed to pinpoint the alleged mastermind behind one of the worst malware known till date.

“Action taken by the NCA to combat the threat will give the UK public a unique, two-week opportunity to rid and safeguard themselves from two distinct but associated forms of malware known as GOZeuS and CryptoLocker,” said NCA in a statement.

For those who are no aware of the two malware â GOZeus is a peer-to-peer variant of the Zeus family of malware that was first spotted sometime in September 2011 and it has been specifically designed to steal bank login credential from victimâs computers.

The malwareâs lethal aspects comes from the fact that it utilises a peer-to-peer network to remain decentralised thereby making it harder for law enforcement agencies to pin-point its location.

Cryptolocker malware encrypts usersâ personal files and folder through the use of public key encryption system and demands a ransom in lieu of a decryption key. It is estimated that nearly 250,000 systems have been infected by Cryptolocker in the UK alone.

If GOZeus finds that its attempts of infecting a computer are being thwarted, it will install Cryptolocker and hold usersâ data on ransom.

NCA has warned that users may receive legitimate looking emails with links or attachments that if clicked upon or opened would leave their systems compromised.

“(The links or attachments) may look like they have been sent by genuine contacts and may purport to carry invoices, voicemail messages, or any file made to look innocuous,” the NCA warned.

“These emails are generated by other victims’ computers, who do not realise they are infected, and are used to send mass emails creating more victims.”

Because of FBIâs operation the communication channel between those involved in the huge Zeus cybercrime has been disrupted and NCA has said that users now have a two week lead.

“Nobody wants their personal financial details, business information or photographs of loved ones to be stolen or held to ransom by criminals. By making use of this two-week window, huge numbers of people in the UK can stop that from happening to them,” said NCA’s National Cyber Crime Unit deputy director Andy Archibald.