WhatsApp for Windows Phone is back 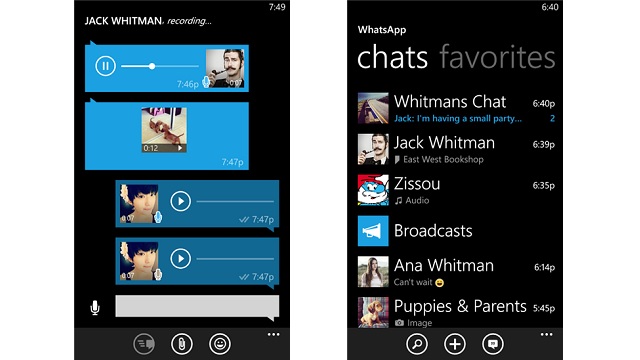 WhatsApp for Windows Phone is now back in Windows Phone store after over two weeks of hiatus because of technical issues that marred that app.

WhatsApp pulled its app from Windows Phone Store over two weeks back for unspecified reasons and a couple of days later it revealed that it unpublished the app for technical issues and that it was working closely with Microsoft to resolve them and get the app live again as soon as possible.

Just yesterday Microsoft revealed that it was actively working with WhatsApp to bring back the messaging app. Microsoft stated that the technical issue was how Windows Phone 8 Update 3 handled notifications and that affected WhatsApp.

âWe know it is taking longer than expected to find a solution and make WhatsApp available again. However, quality is a top priority for Microsoft and WhatsApp and we want to get it rightâ, said in a statement.

Hours after this statement, Microsoftâs Joe Belfiore tweeted âSorry for being quiet about WhatsApp. We’ve worked with them to get a fix built and expect it to be back QUITE SOON.â

At the time it was believed that WhatsApp and Microsoft will take a few more days at least to reinstate the app but that turned out to be a wrong assumption as the messaging app was re-published on Windows Phone Store just two hours after Belfioreâs original tweet.

You can download WhatsApp from Windows Phone Store here.