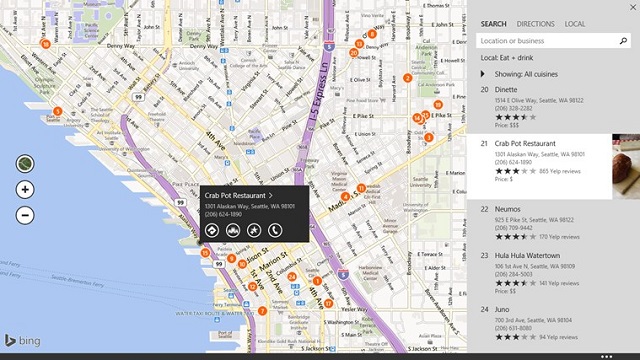 In the absence of the official Google Maps app for Windows 8, Bing Maps, along with Nokia Here Maps are your best maps apps from the Windows Store. And now Bing Maps has received a fresh update.

The official Bing Maps app for Windows 8 has received a big update on the Windows Store, bringing many new features and options, some of which were requested by users themselves.

First of all, the search box and map controls are now always visible in the app, which makes it easier to focus on the maps and make use of the adjacent options.

There some other minor design improvements that youâll discover along the way. Also, the search experience has been improved with the inclusion of autosuggest and the accuracy has also been worked on.

But the biggest change that youâll observe is the integration of ratings and reviews from Yelp, TripAdvisor and some other providers.

Also, your favorites are now available across Windows 8 computers, laptops and tablets but also on Windows Phone 8.1, which is really useful. Last, but not least transit and driving directions availability has been included in additional markets, but as of now we donât know exactly which are these countries.

Reproduced with copyright permission from WindowsReport. You can continue reading the entire article here.