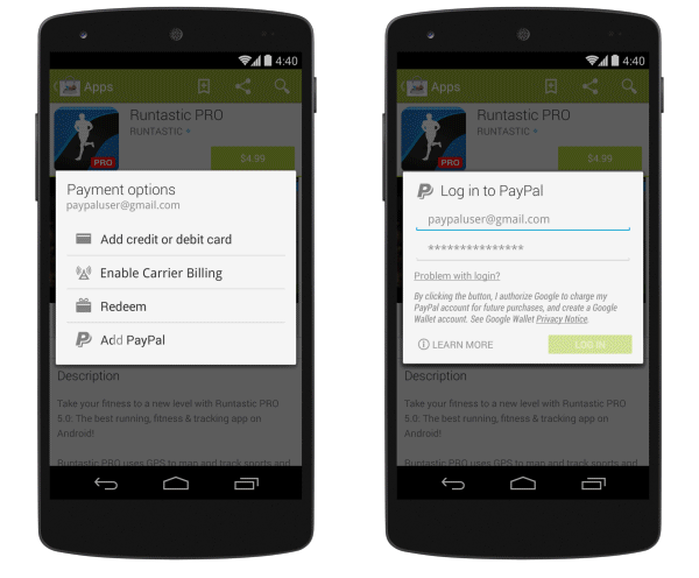 Google on Thursday announced that it will accept PayPal payments for apps, games, books and other digital goods from its Playstore.

The PayPal integration update will be rolled out in US, Germany, Canada, UK, Austria, Belgium, Finland, France, Ireland, Italy, Netherlands and Spain.

âWhen you make a purchase on Google Play in these countries, you’ll find PayPal as an option in your Google Wallet; just enter your PayPal account login and you’ll easily be able to make purchases. Our goal is to provide users with a frictionless payment experience, and this new integration is another example of how we work with partners from across the payments industry to deliver this to the user,â read the blog post.

The company said that this move is to meet the demands around the world, noting that over two-thirds of the purchases on Google Playstore happen outside the US. While there isnât any official sales figure revealed, Google claimed the sales of apps and games on Google Playstore to gone up by over 300 percent over the past year with the continuous increase in international sales.

Google has expanded its carrier billing service with 7 new additions, taking the total to 24 countries, including Singapore, Thailand and Taiwan. Gift cards are now available in 13 countries including Germany and Japan.

Google has also extended its support for developer sales in 13 new countries including Indonesia, Malaysia and Turkey, bringing the total to 45 countries. Buyer currency support is also available to 28 new countries, making it a total of 60 countries.